THE WEIGHT OF RENEWABLES ON GLOBAL ECONOMY

Today it is confirmed that renewables hold the main role in the global energy transformation, and worldwide each country is moving towards this trend. However, local policies and technological innovation are not enough for this evolution to take off. The economy around renewable energy projects is a further key factor to steadily bring renewables to a more competitive status worldwide.

We read the last report released by IRENA – Renewable Power Generation Costs 2017, to find out more on the real costs of renewable energy based power plants.
The report focuses on the analysis of the impact of technology and market development on the LCOE, indicator of the price of electricity required for a project where revenues would equal costs, including making a return on the capital invested equal to the discount rate or WACC. The indicator varies by technology, country and project, based on the renewable energy resource, capital and operating costs, and the efficiency/performance of the technology.
The report takes into consideration about half of all installed renewable power generation capacity, that means about 15000 utility scale projects in operation, together with an additional database of 6000 auctions.

So, how much do renewables cost?

Since 2012 more than half of new electric power generation capacity additions came from renewables, at the end of 2016 more than 2000 GW where generated from renewable resources, and in the last 2 years these improvements also remained in the range of fossil fuel electricity generation costs.
Cost reductions where mainly driven by several factors as increasing economies of scale in manufacturing, more competitive global supply chains, technological improvements, experienced project developers, and optimised O&M practices.

These drivers create a virtuous cycle in which long-term support policies accelerate deployment of renewables and therefore technological innovation that bring to a general cost reduction.
We can identify three main drivers that move this cycle:

Considering that the cost range for each technology can vary depending on the different countries, and also for each single plant due to site-specific costs, from an overall analysis

“virtually all renewable power generation technologies now not only include significant number of projects which offer competitive electricity costs, but are also increasingly overlapping towards low-end of the fossil fuel electricity cost range.”

In particular in 2017 a number of newly commissioned projects (bioenergy, hydro, geothermal, wind and solar PV) competed with fossil-fuels without any financial support, and in most cases renewable technologies completely out-compete fossil fuel-fired power.

In 2017 again, average electricity costs for bioenergy, geothermal, hydro, wind and solar were all often the cheapest source for new generation needs.

Looking deeper into our main technology applications there are very positive trends ahead. Between 2006 and 2016 CSP applications grew on a continues and positive trend, mostly in Spain and USA. These two countries alone account for more than 80% of the total cumulative installed capacity. Since 2013 CSP application began to increase in emerging markets as India, South Africa, Morocco, China, Chile, UAE and Australia. At the end of 2016 about 4GW from CSP applications were under construction.
CSP technology development has been slower compared to other renewable applications, still there are significant opportunities for cost reductions as the technology continues to develop and by 2020 commissioned CSP plants will be delivering electricity at a cost that is within the lower end of the fossil fuel fired cost range.

When it comes to bioenergy projects, the analysis becomes more detailed, in fact the wide range of feedstocks available and technology options create a broad range of costs. Asia and South America register relatively low capital costs and available low-cost feedstocks. As a consequence, in these countries bioenergy electricity generation LCOE can be as low as USD 0.04/kWh.
In Europe and North America, where there are more advanced technological options, feedstocks are more expensive and emission controls are stringent the average LCOE is around USD 0.08/kWh – USD 0.09/kWh.

If we take a closer look at geothermal power generation, we discover a more complex situation.

The analysis of capital costs for geothermal power plants, considering the very specific-site issues, is based on a series of assumptions:

According to these assumptions the LCOE varied from USD 0.04/kWh for second-stage development of an existing field to as high as USD 0.14/kWh for greenfield developments.
In 2009 conventional condensing flash power plants were between USD 1 900/kW and USD 3 800/kW, binary power plants were more expensive and installed costs ranged between USD 2 250 and USD 5 500/kW. However geothermal projects can be as low as USD 560/kW where capacity is being added to an already existing geothermal reservoir which is already well mapped and understood, and where existing infrastructure can be used.

According to the IRENA report the increase in installed costs, stopped in 2015. Recent projects in fact, fit in a range between 2000 USD/kW and 5000 USD/kW, confirming the arrest in 2014 of capital costs related to drilling and exploration.

Until 2020 trends seem to be in line with other renewable energy projects, even if the very site-specific nature of the geothermal resource always needs to be carefully considered.

At the end of 2016 geothermal power reached a total of 12.7 GW globally, 26% more than in 2010, demonstrating that the light decrease started in 2015 has however created various development opportunities worldwide. 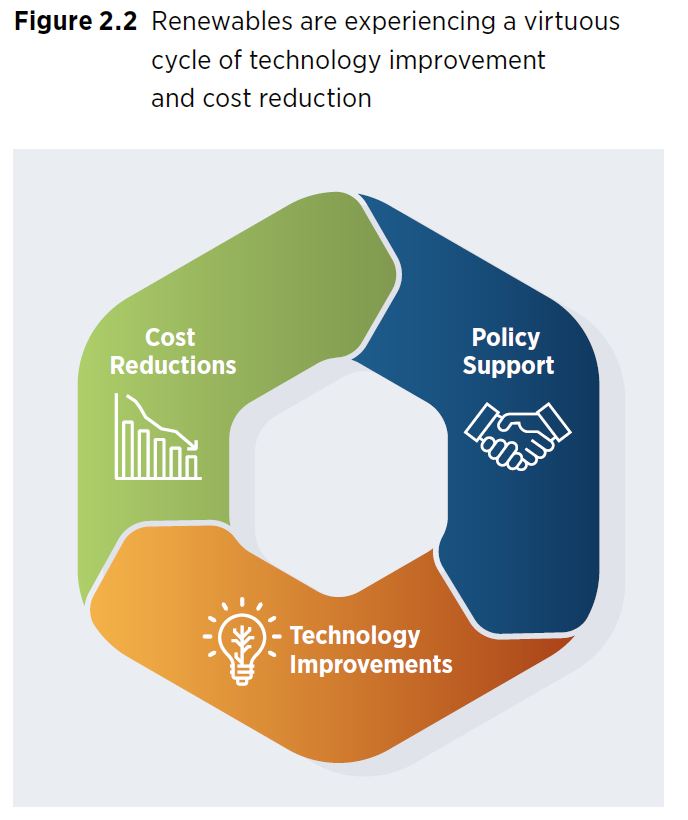