An Organic Rankine Cycle (ORC) system is a closed thermodynamic cycle used for power production from low to medium-high temperature heat sources ranging from 80 to 400°C and for small-medium applications at any temperature level. This technology allows for efficient exploitation of low-grade heat that otherwise would be wasted.

For decades, the traditional choice of expander for ORC cycles worldwide has been to employ axial or radial inflow turbines. Exergy introduced the innovative patented Radial Outflow Turbine (ROT) and is unique in applying this extremely efficient technology at a vast range of ORC power plants with additional advantages. 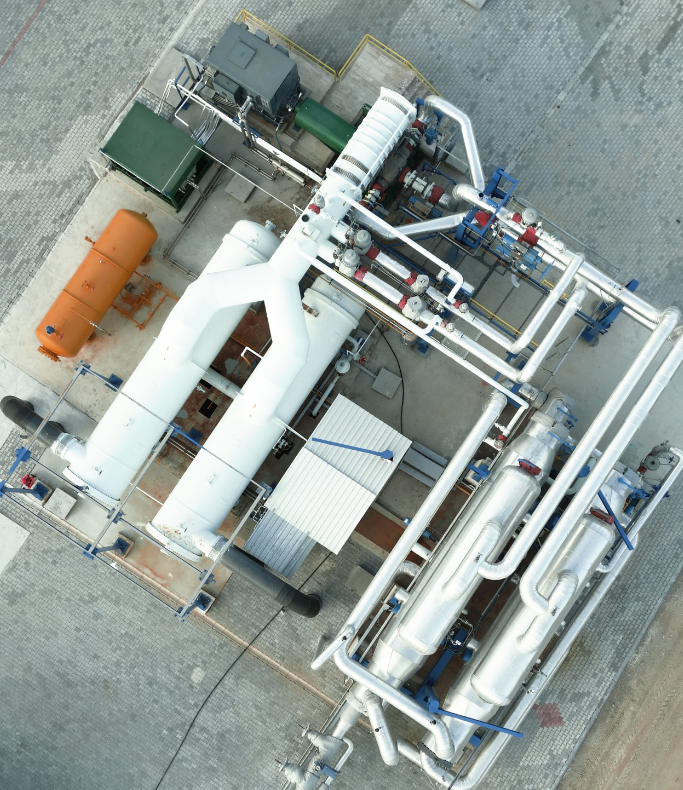 PRODUCE CLEAN AND AFFORDABLE ELECTRICITY FROM A WIDE RANGE OF HEAT SOURCES WITH THE ORGANIC RANKINE CYCLE.

The working principle of an Organic Rankine Cycle power plant is similar to the most widely used process for power generation, the Clausius-Rankine Cycle.

The main difference is the use of organic substances (hydrocarbons or refrigerants) instead of water (steam) as working fluid.

The organic working fluid has a lower boiling point and higher vapor pressure than water and is therefore able to use low-medium temperature heat sources to produce electricity more efficiently than steam cycle.

The organic fluid for the cycle is chosen for best fit with the heat source according to their various thermodynamic properties, thus obtaining higher cycle and expander efficiencies.

The main components
of an Organic Rankine Cycle power
plant include:

The main components of an Organic Rankine Cycle power plant include:

This is the key component of the entire ORC power plant and determines ORC system performance. It expands the working fluid, producing mechanical energy that is converted into electricity by a generator coupled with the turbine shaft.

The working fluid flows through the heat exchangers, extracting heat from the heat source. Shell and tube heat exchangers are usually applied but they can vary in terms of geometry and configuration depending on the energy source and total thermal input.

With the direct air to fluid heat exchanger, the organic fluid is cooled and liquefied before entering the pump. The use of air eliminates the need for water treatment and makeup. It is also possible to use a water-cooled condenser.

Brings organic fluid from the condensation pressure to the maximum pressure of the Organic Rankine Cycle. The pump is usually driven by an electric motor at variable rotating speed. 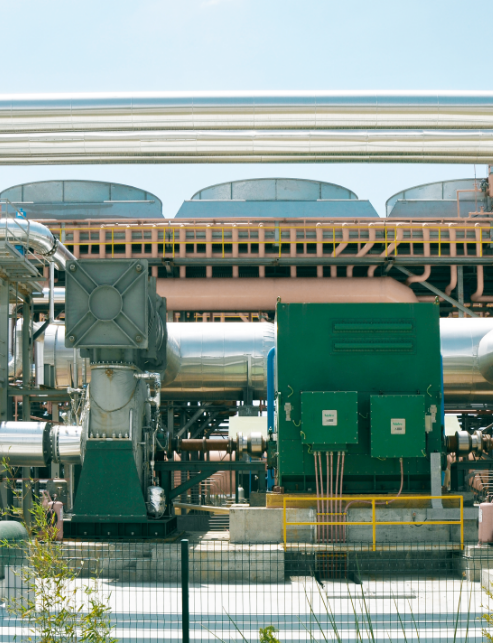 By converting thermal energy to electricity from low to medium-high temperatures, ORCs are suitable for a wide range of applications, given a plant size between 100 kW ad 50 MWe, including:

Read below to learn why ORC cycles are more competitive and flexible than steam Rankine cycles.

Suitable for a wider range of applications worldwide

NO LIQUID PHASE DURING EXPANSION

No need for operators

Ease of transportation and installation

DESIGN FLEXIBILITY FOR USE OF THE MOST EFFICIENT WORKING FLUIDS

Customized solution with respect to resource

Lower environmental impact with no waste of water

Ideal for cycling environments and where fast start stops are required

Suitable for a wider range of applications worldwide

NO LIQUID PHASE DURING EXPANSION

No need for operators

Ease of transportation and installation

DESIGN FLEXIBILITY FOR USE OF THE MOST EFFICIENT WORKING FLUIDS

Customized solution with respect to resource

Lower environmental impact with no waste of water

Ideal for cycling environments and where fast start stops are required

Sorry, your ID is maybe not correct (If you did not place any ID that means auto-detect does not work.). And please make sure that your selected element is developed with Swiper.

In the last two decades, ORCs have experienced significant growth, becoming the preferred technology for geothermal power plants. The urgency of increasing energy efficiency and implementing decarbonization technologies will also drive wider adoption of ORCs for waste heat recovery in a variety of industries.

The use of ORC expands rapidly, especially for biomass and geothermal applications, leaving great margin for growth in WHR and solar thermodynamic applications.

In Finland, Prof. J. Larjola leads the development of high-speed hermetic turbogenerators in the hundreds of kWe range, in which the turbine, generator and pump share the same shaft. One of the first applications of this type of ORC turbogenerator was charging the batteries of a deep-sea submersible (1987).

Prof. G. Angelino, together with Ennio Macchi and Mario Gaia start Italian research activity in the ORC sector at Politecnico di Milano. They begin studying the possibility of using organic fluids instead of water to power the Rankine Cycle for automotive, space and solar applications.

Prof. Luigi D’Amelio employs an organic fluid in a real turbine system. He is also the first to consider the advantages of high molecular mass fluids to reduce rpm and the number of turbine stages.

Frank Ofeldt develops a power system engine that uses naphtha instead of water.

Prof William John Macquorn Rankine develops a complete theory of the steam engine describing how power can be generated from the temperature difference between a heat source and a cold source and idealizing the thermodynamic cycle that then took his name: Rankine Cycle.

Nicolas Léonard Sadi Carnot publishes Reflections on the Motive Power of Fire, in which he expresses the first successful theory of the maximum efficiency of heat engines, laying the foundations for an entirely new discipline: thermodynamics.